We just came back from 12 days in Sardinia with baby Aurora and my parents.

Here are the pictures:
https://goo.gl/photos/yTBhXhAzRZpmiUwz8

My parents wanted to visit us in Italy this summer. They also normally take a week or so beach vacation each year in NJ at LBI. So we suggested that if they were going to fly out here anyway, to take their beach vacation somewhere in the mediterranean instead.

They flew in on June 4th. We spent a day in Rome and a day in Anzio (beach town south of Rome) visiting Daniele’s Zio Amato.

Then on the 7th we took the train an hour north to Civitavecchia. That’s the main sea port for Rome and where a cruise visiting Rome would dock and let off its passengers.

We would take an overnight ferry right to the town of our resort in Sardinia (Arbatax). We booked a cabin with 4 beds for the 5 of us (including the baby) with Tirrenia. I was expecting a floating version of Trenitalia’s overnight cabins, but it was more like a nice hotel. As soon as we walked in there were chandeliers. We took escalators up to the level with the check-in desk where we got a card-key for our room.

We boarded around 6pm, so we explored a little bit. We didn’t even get to see most of the boat, for example the map showed a piano bar. We did get to spend a bit of time in the kid room.

Our little cabin was bigger than I expected. There were bunk beds on each side, with a desk in the middle. The desk was high and wide enough to fit our two large and one small suitcases underneath. And we had a private bathroom with a shower.

We actually would have liked if the boat ride was longer. We arrived at the port of Arbatax at 4:30 in the morning! We broke up our one-mile walk to the resort be stopping for a long breakfast.

We thought that lots of people would arrive to the resort via the ferry, but apparently not! Arbatax is pretty far from either airport to the north or south and I read several reviews complaining about the ride, so I’m very happy we took the ferry. Instead of losing the first and last days of our trip to travel, we got an extra half day before check-in as well as after check-out (the boat back to Rome left at midnight) on each end of our stay.

It’s the largest resort in Sardinia. It’s a huge nature park with several different resorts inside, but all under the same owner.

We already had our eye on “Telis” (the largest sub-resort) when Daniele found an discount site offering a deal for “Dune” at the same price as Telis. Dune is the beach-front part of the parent resort and where we ended up.

We got 2 little huts next to each other (one for me, Daniele, and Aurora; one for my parents). The location was perfect, like a 1-minute walk to the Dune Reception / Dining Hall and another minute to the beach.

We were also close to the “Tropical Pool” over in the “Telis” part of the resort (all the pools are in Telis, which is behind Dune). The Tropical Pool was so pretty and perfect for Aurora. It’s a pool with no sides. It just slopes down, like a beach but no waves or sand. 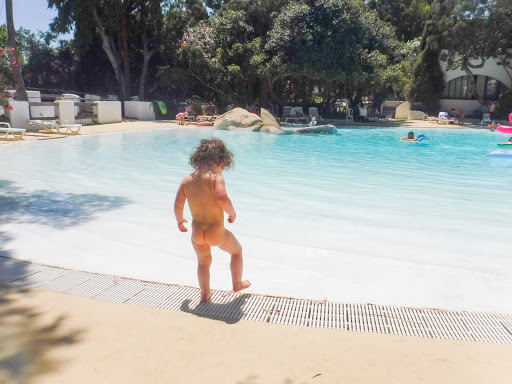 (Pictured about to be dressed for a nap. She swam in swimmy diapers and a bathing suite.) 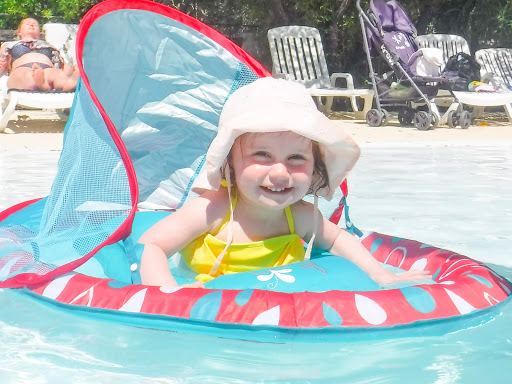 We got the half-board option which included buffet breakfast and buffet dinner. Dinner had unlimited wine. We all liked the food. We were on our own for lunch — though who can eat lunch after a big buffet breakfast? Also there was plenty of stuff to buy at the bars. There were also restaurants, but we only ever went to the pizzeria, which I thought was very good. Even though the resort sold things, they were totally cool with us eating our own food and drinking our own booze in the common areas.

With taxes and everything, these 2 beach-front huts and tons of good food cost $48 per night per person (Aurora was free). Which when we go to the Jersey Shore, can be what we spend on restaurants. We were all very happy with the resort, but for the money it’s amazing.

Part of the discount package Daniele found included a day for each of us at the Spa. Italians use the word “Spa” and there are spa treatments offered there, but I would describe it more like modern roman baths. It’s a series of different pools/rooms that you go through. The rooms or pools can be hot or warm, some with hydromassage, a waterfall you stand under, a turkish style steam room, a dry sauna. Then you have tea and cookies at the end. Daniele and I went first while my parents watched Aurora. Then they went the next day.

The following day we went on a tour with the park ranger through the nature park part of the resort and the farm there, too. (A lot of the food comes from their own farm.) Daniele and I brought Aurora back 2 days later just to the farm and we had all the animals to ourselves. 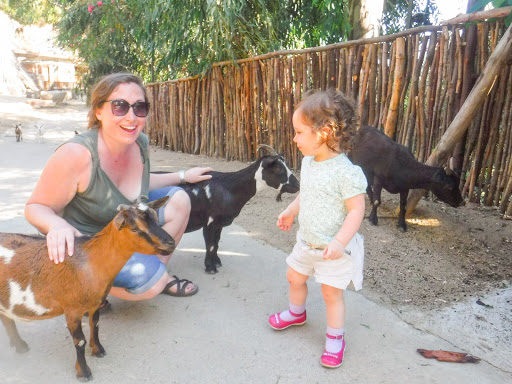 There was tons of free stuff like that to do. There were shows every night, but we only watched one: a greek mythology story about a mermaid and a fire god. It was performed in the water at the beach right in front of our rooms / dinner. That’s how lazy we are.

You could also take a boat to Orrì, a bigger sandier beach for $5, so we did that one day. My mom even went in the water! 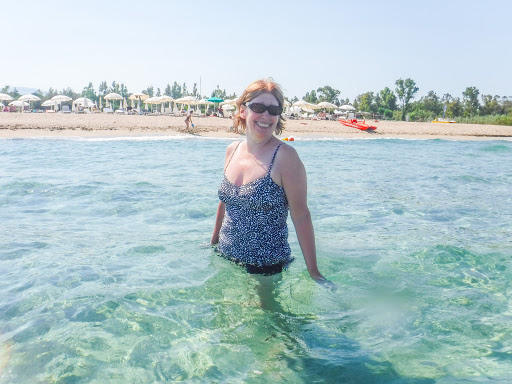 Daniele really wanted to explore outside the resort, so one day we left the baby with my parents and rented a motorbike. We went North to Santa Maria Navarrese beach, which was gorgeous. And the town of Baunei up on the mountain (fun ride on our little 50cc motorbike). I was surprised by how similar Sardinia looked to Utah once you went just a mile inland; it’s all red rocky mountains. We also went to Altopiano di Golgo. 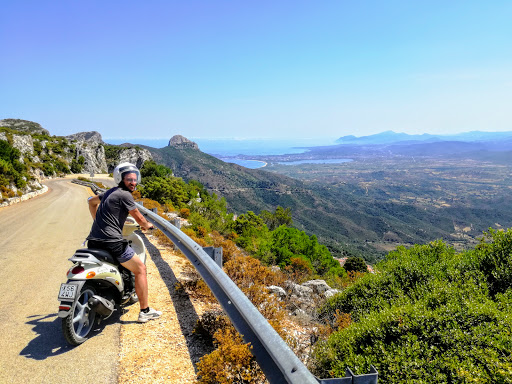 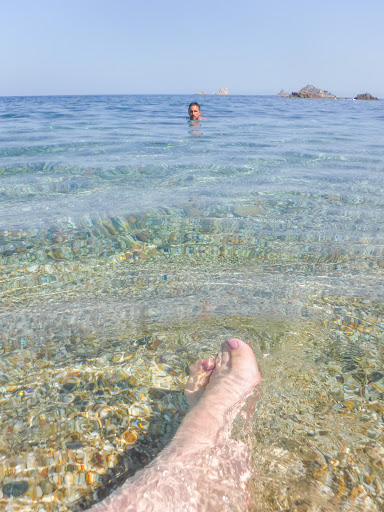 And that’s how I spent my summer vacation :)